My fiance is one of the biggest Disney fans I know, but when my sister asked us last year if we wanted to accompany her family on a Disney cruise, he took a surprising amount of convincing!  Jared and I had never been on a cruise to begin with, and before my sister brought it up, it was never something we had any real interest in.  That said, I’m a sucker for all things Disney and travel, so I was automatically on board (no pun intended).  My fiance, however, wanted to hold off on booking the cruise until we knew everything there was to know about it.  Which, to be fair, is the smart way of doing things.  Everything sounded amazing but there was still one question Jared had.

“Why spend all that money on a cruise when we could just go to the Parks instead?” 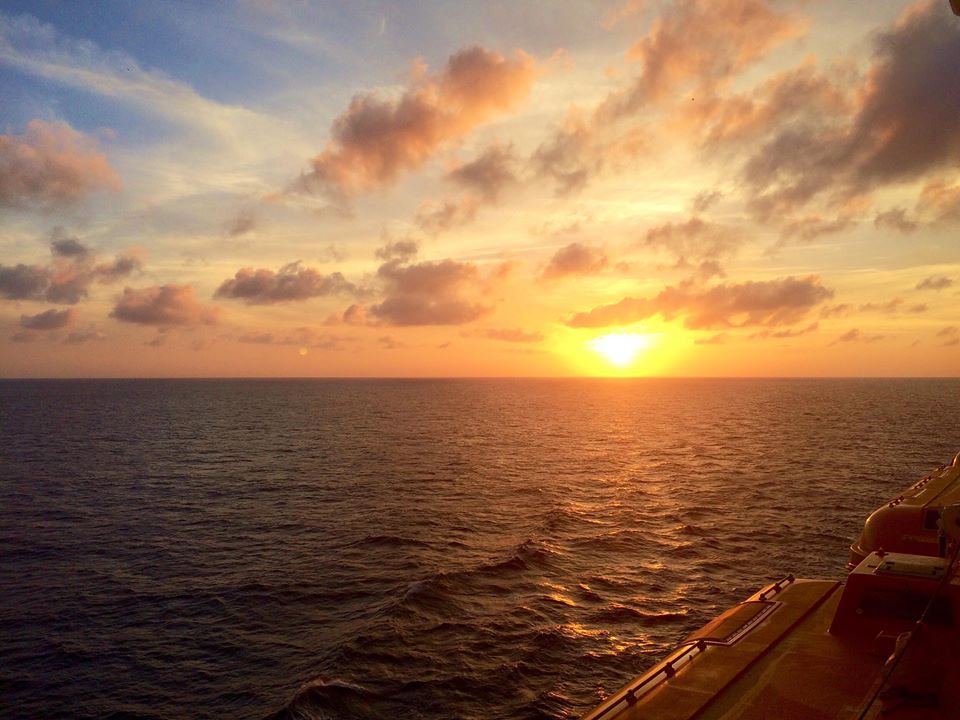 Ironically, my fiance and I get this question all the time since we’ve become champions of the Disney Cruise, and it frustrates him to no end! It’s a little unfair to compare the cruises to the Parks because they’re just so different.  I’m not here to argue that a Disney Cruise is superior to a trip to Disney World.  What I am going to do is walk you through the benefits of the cruise versus the Parks, and the main differences between the two.  So without further adieu, let’s dive in! (Okay, that pun was intended).

At the Parks you are constantly rushing from one activity to the next.  While this adds to the excitement, you may find yourself going home and not feeling very refreshed.  I can say with total sincerity that during our cruise, Jared and I were completely relaxed and went home feeling re-energized.  Sure, there’s a spa on board and all of your needs are catered to 24/7.  But it was more than just that.  We did not have a strict itinerary that we had to follow at the risk of ruining part of our vacation as you often do at the Parks.  Our feet were not sore or blistered at the end of the day from walking or running.  The at-sea days allow for time to just enjoy being with your loved ones.  Whether you’re lounging poolside or participating in the on-board activities, I believe that there is more of an opportunity to bond with one another.

One of the obvious benefits of the Disney Cruise versus the Disney Parks is that your vacation is not confined to the same place.  Don’t get me wrong-there is never a dull moment when you’re at Disney World and Epcot is truly a special thing.  However, when you’re traveling on a Disney cruise, you get the best of both worlds.  You can travel anywhere from the Caribbean to Alaska and still feel like you’re getting a true Disney experience.  One minute you’re meeting Cinderella, and the next you can be snorkeling in the bluest water you’ve ever seen.  It’s the perfect balance for Disney lovers who still want something a bit more adventurous! 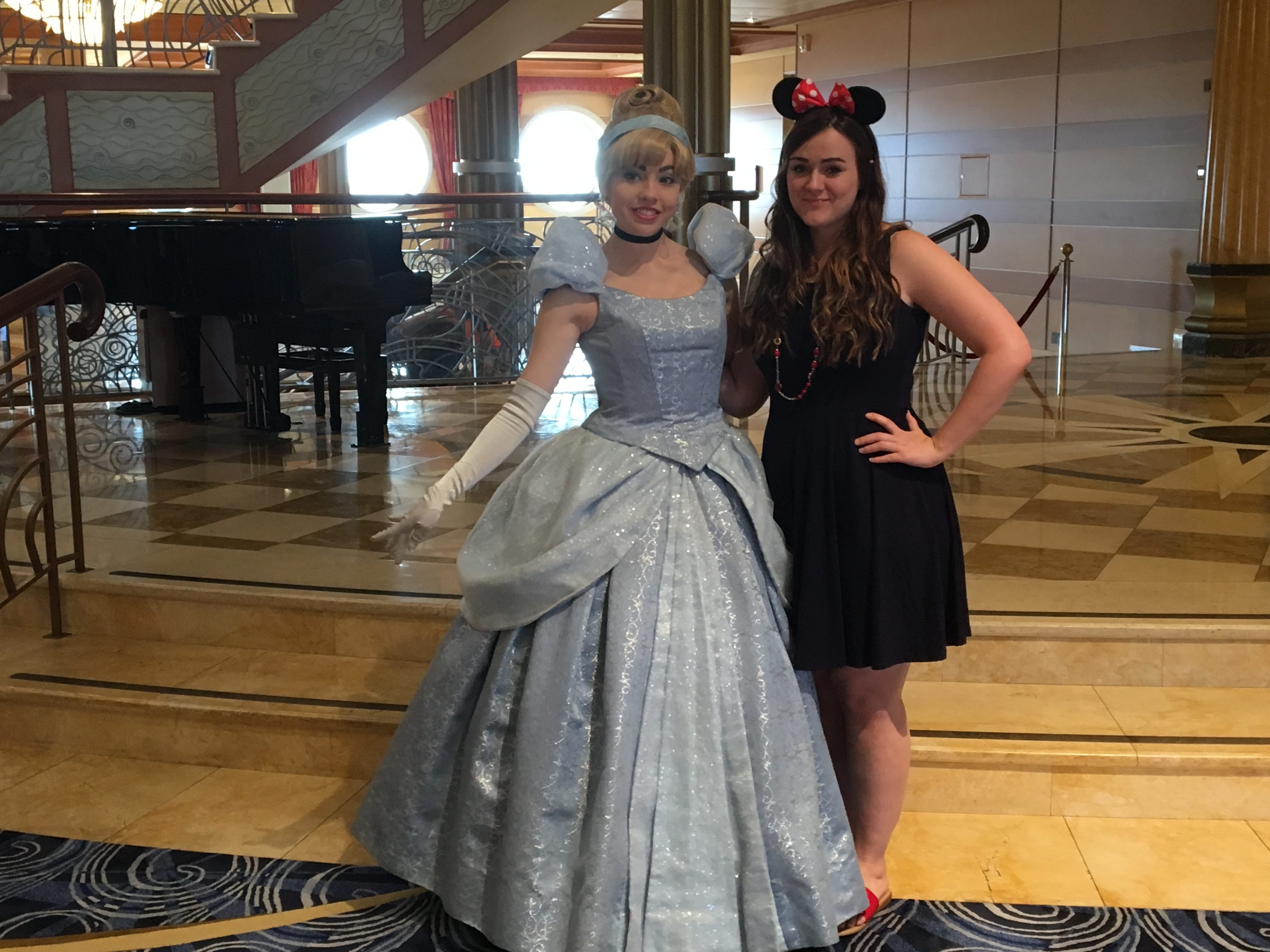 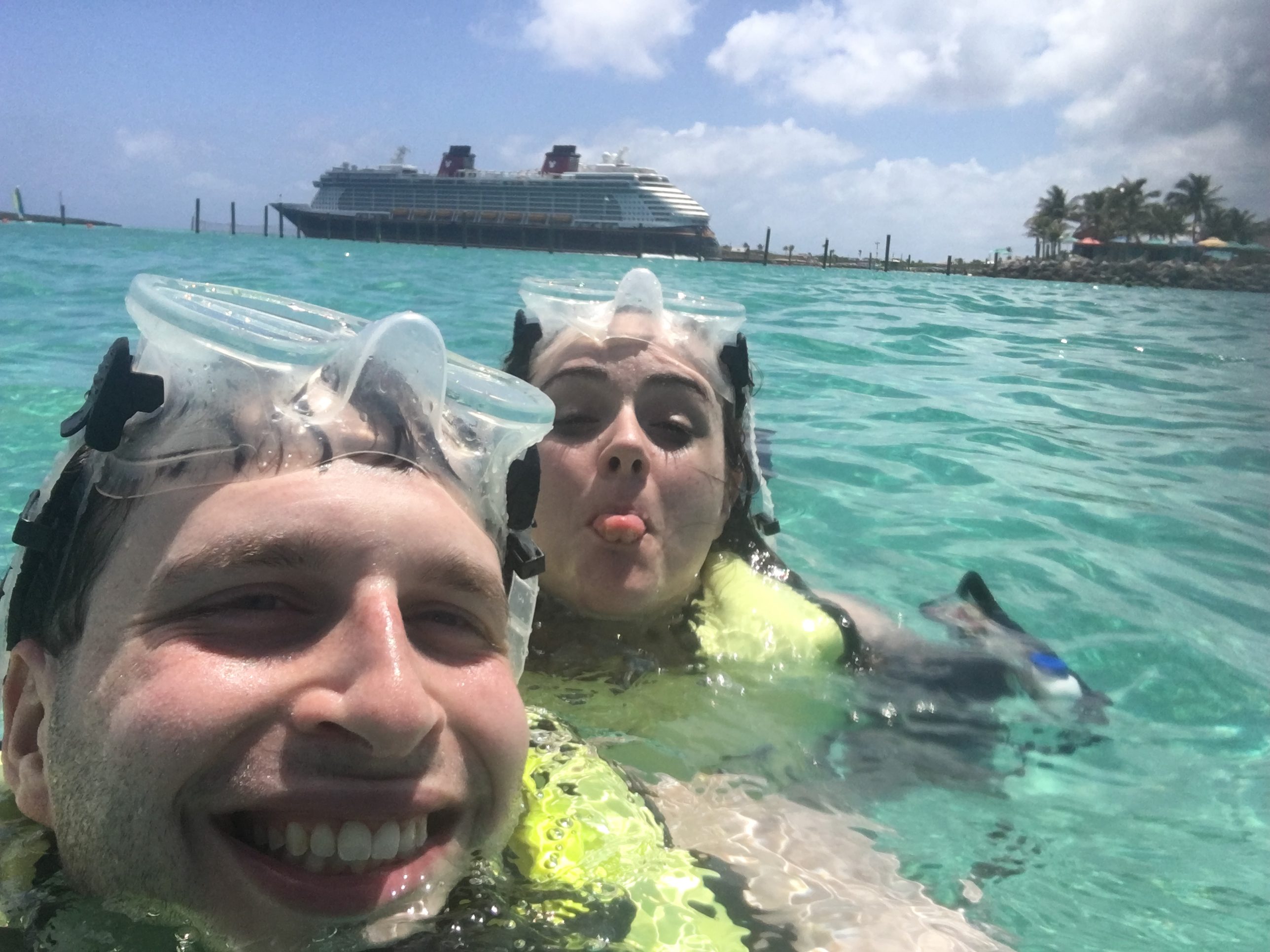 Perhaps the biggest difference my fiance and I noticed between the cruise and the Parks, was how intimate the Parks were in comparison.  Depending on when you visit the Parks, you may have trouble walking without accidentally bumping into someone.  This isn’t something you have to worry about on the cruise because there are obviously significantly less people.

The ship we went on, the Disney Dream, has an amazing water coaster ride on the top deck.  Never in a million years did I think I would go on that thing, but my fiance finally persuaded me to.  It was so much fun that I wanted to do it over and over again.  At no point did we have to wait more than a few minutes, and at night there was no line at all.  It was amazing!

At the Parks, you have to worry about paying for your hotel, your meals/dining plan, and now parking. Almost everything is included in the price of your cruise. You can order room service 24 hours a day and the only thing that will cost extra is tipping.  Alcoholic beverages in general you must pay for yourself, but you are allowed to bring some of your own on the ship!  Each adult is allowed to bring a 6 pick of canned beer, or 2 bottles of wine or champagne.  At each port of call, you are allowed to bring more on.  (I’m making it sound like we did a whole lot of drinking on our cruise here than we actually did…oops)! A lot of people don’t realize this but you can order as much food from the restaurants as you wish.  You can ask for two desserts or another meal to go!  There are also buffets, a station for ice cream, and a station for soft drinks which are all included.  Oh, and the amazing on-board entertainment and movie theaters?  Also included.

Okay, let’s be realistic: the Parks do offer more activities.  The cruise ships are big but…Disney world is twice the size of Manhattan!  That said,  there is always something fun happening on the Disney cruise.  For instance, you can see a Broadway style show just like you can in the Parks!  The Disney Dream now has an amazing Beauty and the Beast show which my fiance and I are dying to see.  There are on-board celebrations featuring Mickey and the gang, princess meet and greets, themed nights such as Pirate night, and the list goes on!  On the Disney Dream and Fantasy, you can even play mini golf!  Check your Disney Cruise app if you’re somehow feeling bored to see what fun you’re missing out on, whether it be a trivia game or a drawing class!

I would argue that some adults might actually prefer the Disney Cruise to the Disney Parks.  Not only for the above reasons, but because Disney has gone out of their way to make sure that adults have fun too.  There are adult only pool areas where children are not allowed.  Each cruise ship has bars and night clubs…which are obviously going to be adult only.  You can take a champagne tasting class, or the other beverage tasting classes they have to offer.  (I love my champagne though)!  You can even take a mixology class!  There are also adult only restaurants: Palo, and on the Disney Dream and Fantasy, Remy as well!  Not once during our cruise did I feel overwhelmed or annoyed by the presence of children.

Then again, I love children to begin with and we were also there with my sister and her family.  But still!

My nephew was not happy to leave. 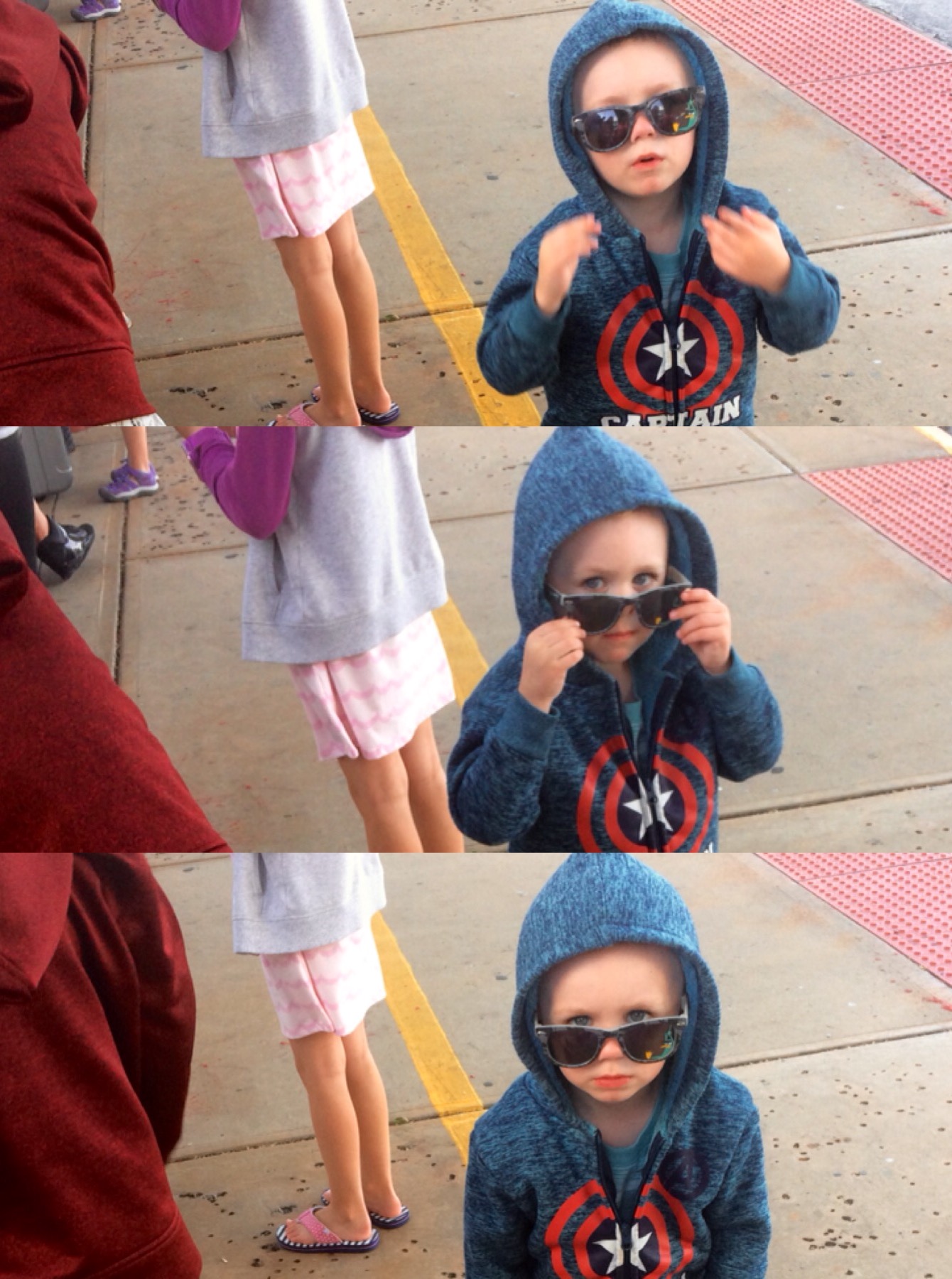 In no way did I intend to bash the Parks in this post!  I adore Disney World, but I feel that Disney Cruise Line doesn’t get enough love!  For our honeymoon later this year, we will be doing a land and sea package which I could not be more excited about!  We had so much fun on our Disney Cruise last year that we put a deposit down for another one while still on the ship!  We got a 10% discount off of our next cruise for doing so, and a stateroom credit of $100.  Doing this was actually Jared’s idea!  I hate to say I told him so…but I totally told him so. 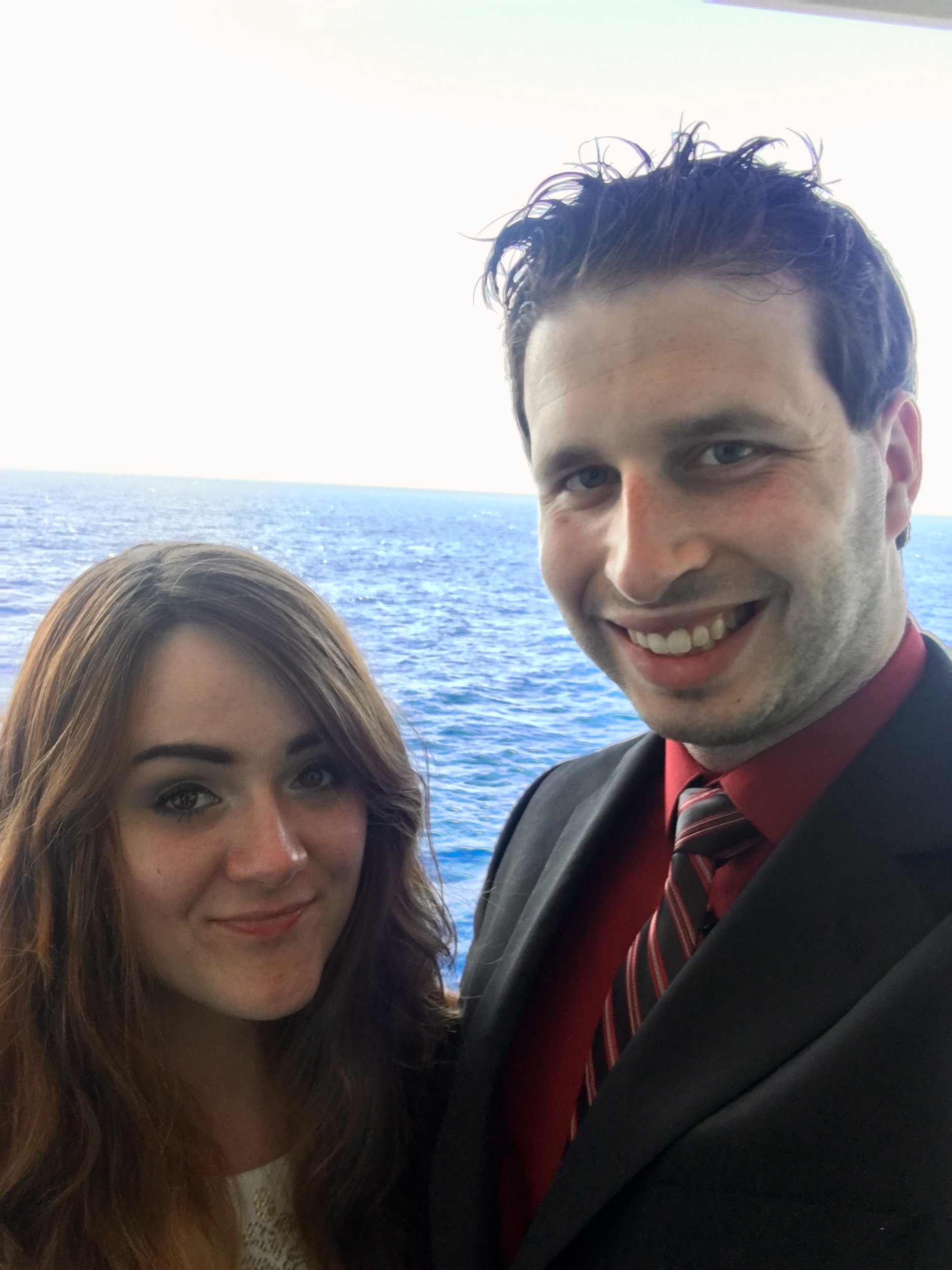 Have you been on a Disney Cruise?  What was your opinion?

I Won’t Be The Thinnest Girl At Our Wedding

To Everything There is a Season: Where Joy Meets Grief

I believe every day life holds a magical beauty all of it's own if we only have the patience to look for it... Follow along as I navigate newlywed life, go on exciting new adventures (and a few misadventures), and learn more about myself and the world than I ever thought there was to know.