Savannah, Georgia: Where Southern charm and hospitality meet the hustle and bustle of city of life.  Savannah is one of the most unique places my fiance and I have had the opportunity to visit. On the one hand, it was beautifully and quietly romantic. On the other hand, it was bursting at the seam with life and excitement. It was an experience I will never forget-and certainly one I hope to repeat every couple of years! After all, David Morrisey said it best:

“Savannah is amazing with the town squares and hanging moss and the french colonial houses.  It’s brutally romanitic”.

If you’re thinking of having a romantic getaway to Savannah, I can’t encourage you enough.  When Jared and I went last October it was a blast-but a bit overwhelming!  There’s just so much to do!  Luckily, we figured it out and I’m here to help you with some tips now! 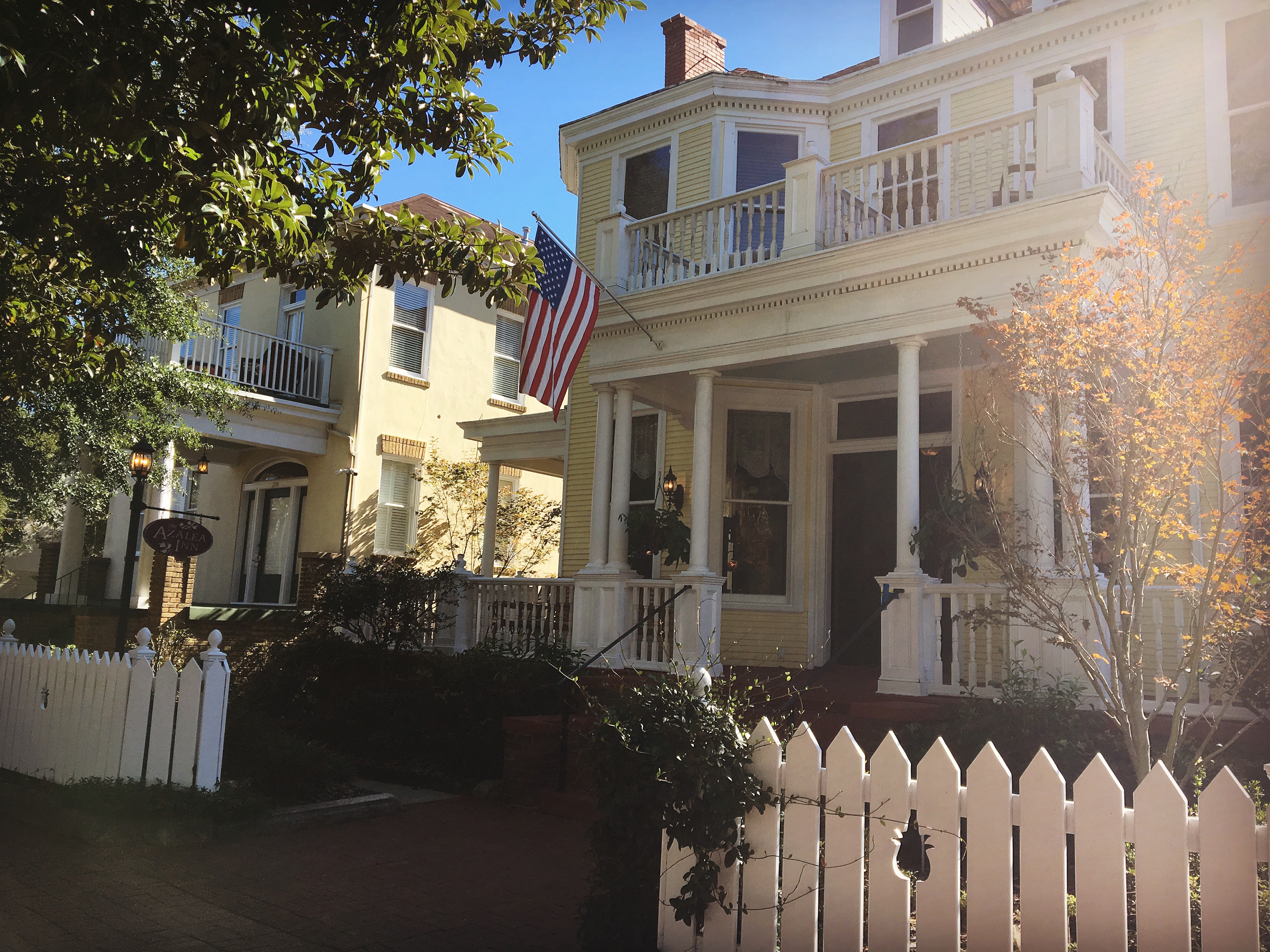 The “main event” of our Savannah Trip was our much anticipated ghost tour.  To go along with that theme, we originally planned on staying somewhere rumored to be haunted. Or rather…I planned on staying somewhere haunted.  My lovely fiance, Jared, begrudgingly agreed with my idea that would likely result in our untimely and mysterious deaths.  I tried my hardest to book a room at The Marshall House, an old Civil War hospital turned hotel, but there was nothing available during all of October.  Mind you, I was looking three months in advance.  So keep in mind, if you’re looking to stay somewhere similar, you will want to book well before your trip.

Things ultimately worked out in our favor though!  We ended up staying at The Azalea Inn and Villas, a quaint little bed and breakfast, in their Chinaberry Suite.  It had a super comfortable queen sized bed and a whirlpool jet tub.  There was also a balcony which was perfect for sipping champagne on while feeling the cool night air and listening to the lively city just a few blocks away. 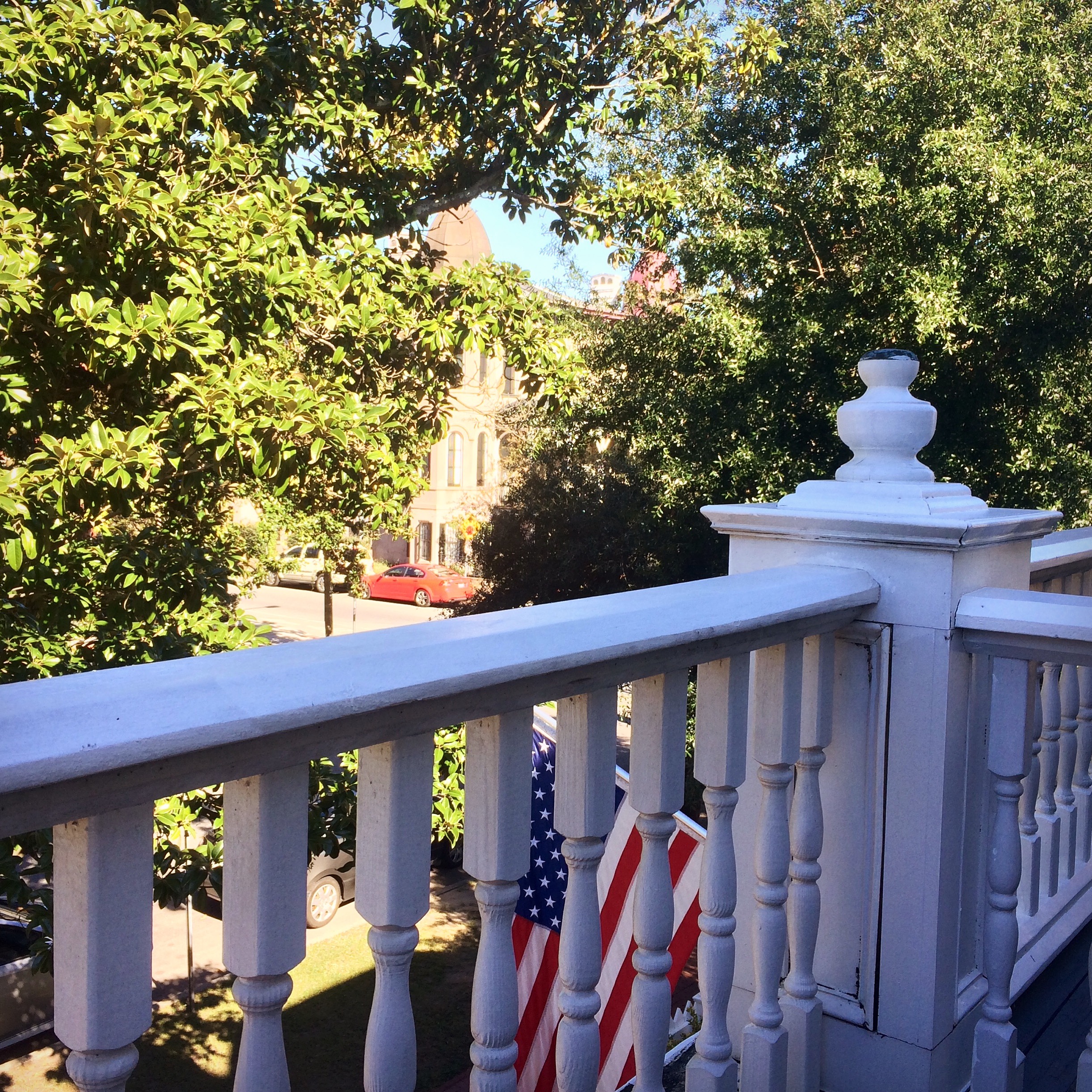 The Azalea Inn and Villas is not haunted, but the friendly staff are way more accommodating than any ghosts I could have encountered would have been.  The bed and breakfast offers a complimentary cocktail hour of wine and cheese before everyone goes out on the town which we, in true Jared-and-Theresa fashion, wasted no time sampling!  And of course, the breakfast was delicious.  The menu obviously changes, but when we were there, they served us grits and a breakfast quiche.  The dining room is absolutely beautiful and adds to the charm as well. 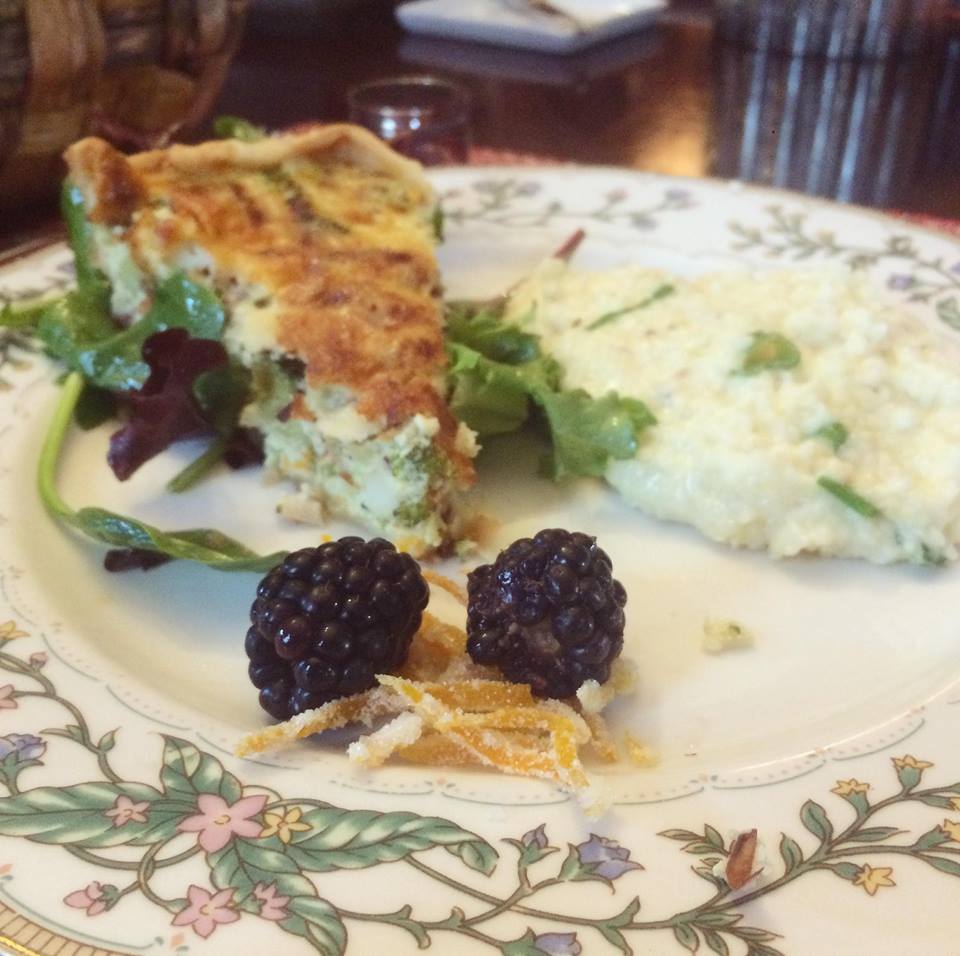 I can promise you that your stay in Savannah will be enhanced by saying in a bed and breakfast or even one of the downtown historical hotels.  There’s nothing wrong with more budget friendly options like a Holiday Inn (I’m no snob-the hotel we stayed in after my engagement was a Holiday Inn and it could not have been more lovely!) but there was just something about staying somewhere less commercialized that added to the magic of our visit.

Savannah has some of the best food this country has to offer!  I spent more time on tripadvisor and yelp than I care to admit before finally choosing where to eat.  Then, I was sure to make reservations for dinner.  For lunch, we were able to try our luck with just popping into places!  But if you’re hoping to get into somewhere like the Olde Pink House, which you most certainly should because A) it’s supposedly haunted and B) I mean just look, 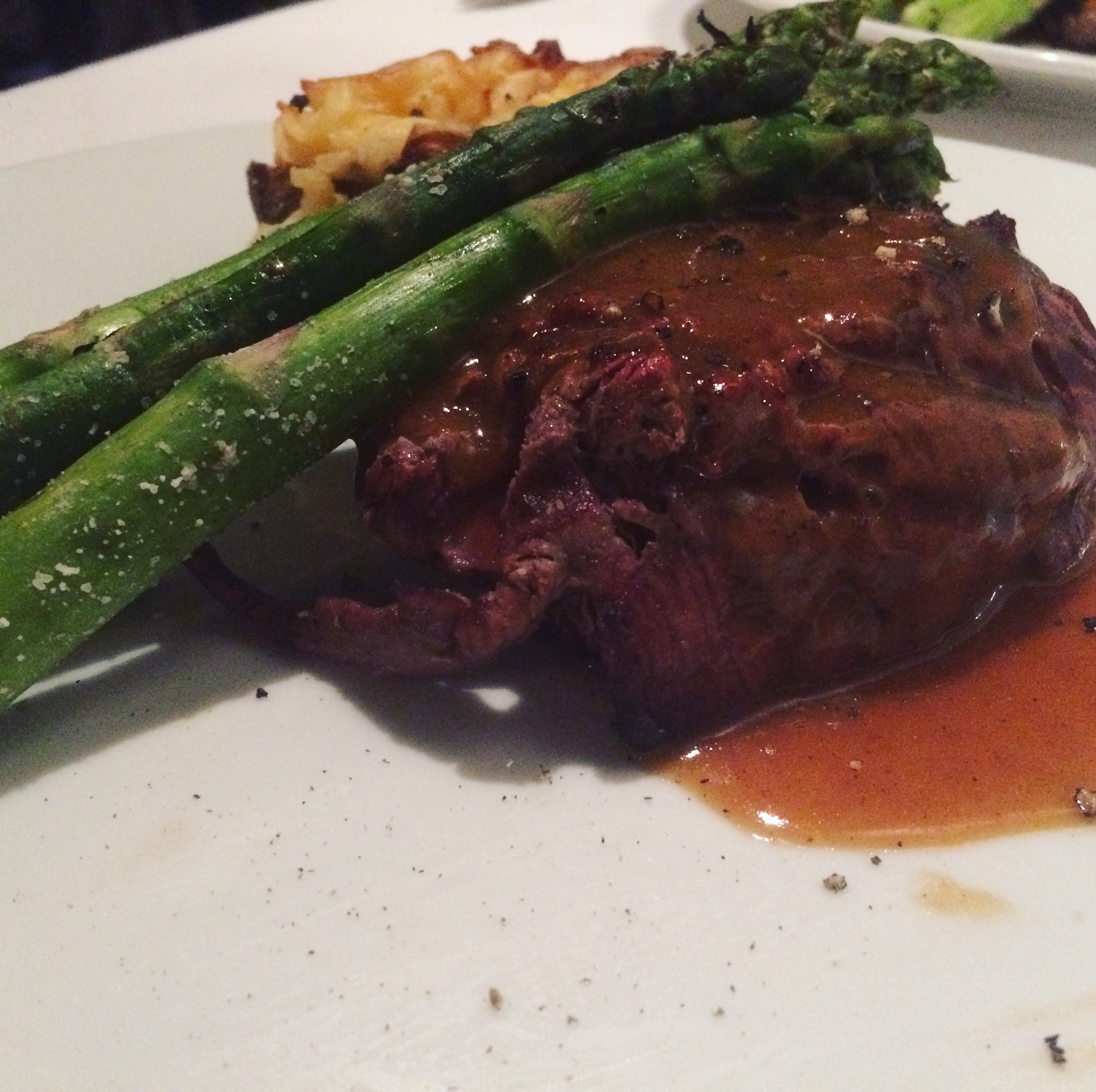 then you definitely need to book a table in advance!  Another place I would highly recommend for dinner is Alligator Soul.  It’s a little hard to find because you have to take a flight of stairs down to it, but it’s worth the little scavenger hunt.  They have some pretty interesting things on the menu, but the most adventurous things we got were the alligator eggrolls. 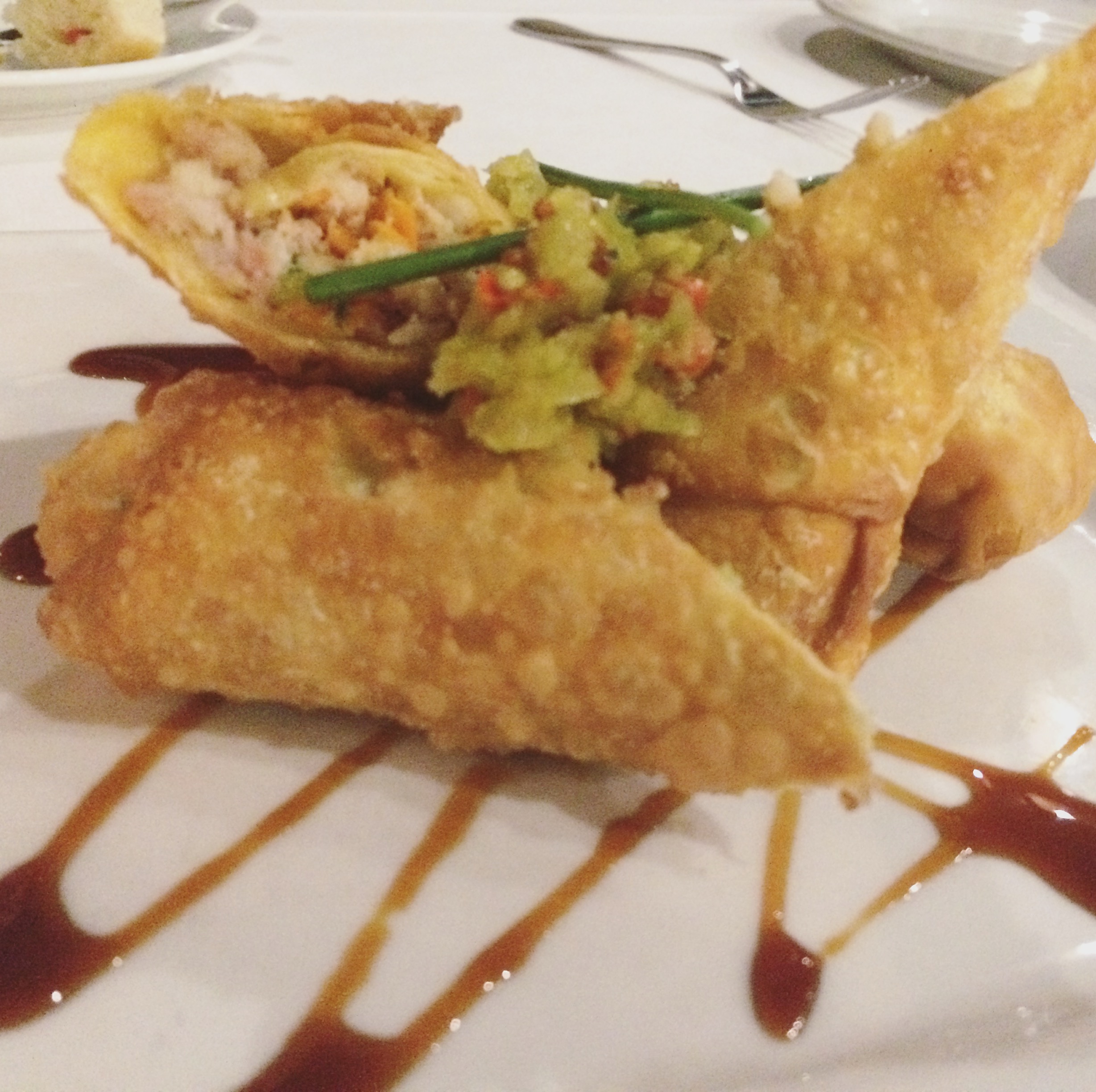 These restaurants are certainly on the pricey side, but Savannah has cheaper restaurants that are of the same quality.  Another favorite of ours was the Bayou Cafe.  My brother, who spent 8 years in the Marine Corps and passed through Savannah frequently, specifically requested Jared and I stop in and pick him up two bottles of their hot sauce.  He loved that sauce so much that when he heard we were making the trip he planned to make a special dinner of chicken wings using the Bayou Cafe’s special sauce.

It lived up to the hype. 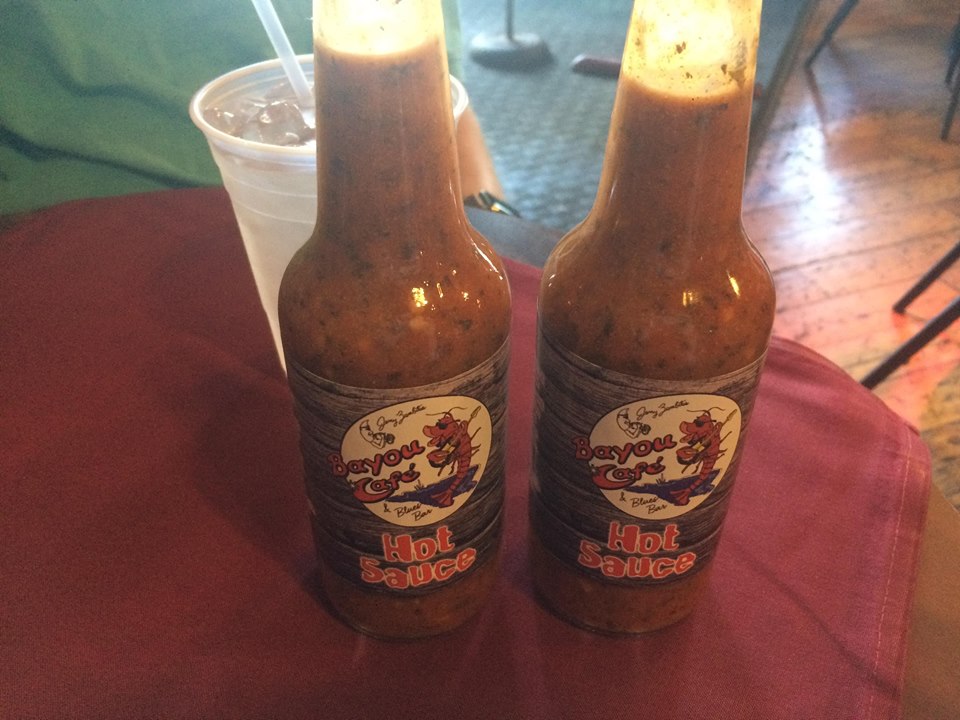 “Savannah is so beautiful that the dead never truly depart.”-James Caskey

They say that Savannah is one of the most haunted cities in the world.  What? Do I have a source for that?  No. But it’s in all the TV shows…so it must be true.  Why are we talking about sources when it comes to ghosts anyway? So not the point right now.  The point is that you don’t even have to believe in ghosts to enjoy a ghost tour!  You get to learn about the history of the city, some of the local lore, and on the particular tour we booked-the guide even touched on some literature.

We booked our with Ghost City Tours.  There are multiple tours available varying from a family friendly tour, a pub crawl, and a late night tour which promises to tell you the darkest of tales.  Naturally, we chose the late night tour.  It was a ton of fun and our guide was informative and engaging; I wasn’t bored for a second and Jared had to sit down at one point because he felt sick from the gruesomeness of one story.  I remained standing and grinning like a maniac, having the time of my life, for a good 30 seconds before I realized the love of my life was sitting on the ground. I made sure he was okay before I went back over to the gates of the graveyard with the rest of the group, looking for ghosts that never did appear.

We did see a lot of fascinating locations that looked particularly spooky under the moonlight and got to hear some chilling stories.  All in all, it was a great time.  Minus Jared almost passing out. If you have a weak stomach…perhaps the family tour would be more your style! 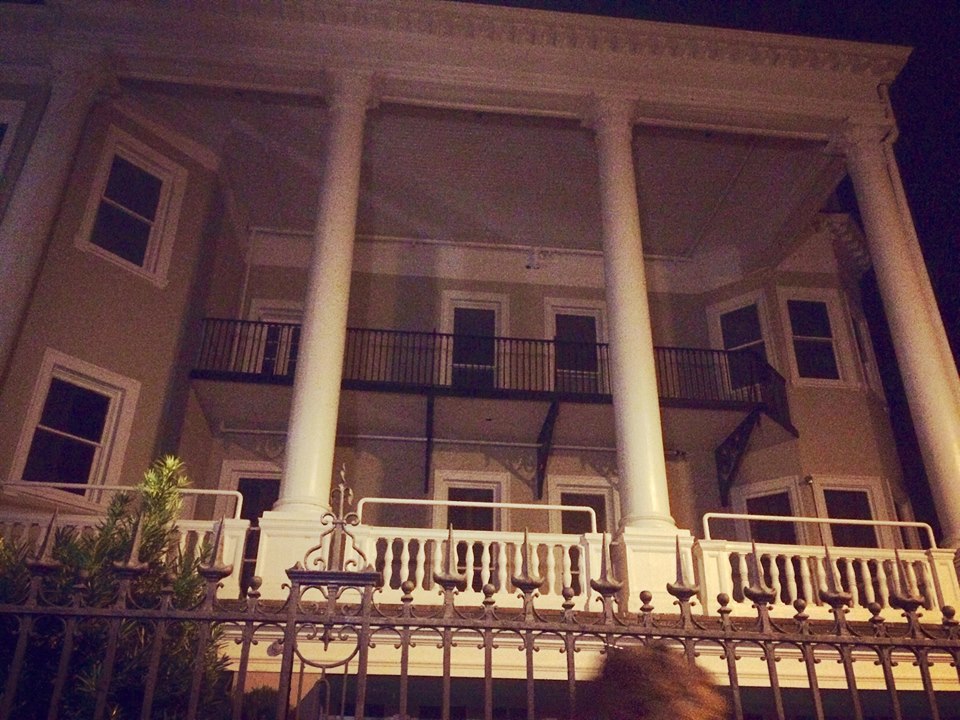 Savannah is one of the few cities in the country where there are no open container laws!  This means that restaurants will serve you your alcoholic beverages in a plastic cup to-go if you so wish. I actually took a drink with me on the ghost tour!  Just be sure to be on your best behavior because there are still laws against disorderly conduct and such.  You can’t abuse a good thing people!

You’re going to be doing a ton of walking in Savannah.  I am not from the city, nor am I used to visiting cities.  You can imagine my shock when my feet were killing me at the end of our ghost walk.  I bought new boots just for our Savannah trip and they proved to be all but useless.  So if you’re a clueless country girl like me, ditch the cute but silly new shoes and go for something that will actually support your feet.  You’ll thank me later.

Plan but don’t over-plan.  There’s nothing more romantic than being spontaneous.  Walk around the city and take in the sights.  I promise you will find things to do that you didn’t even realize were an option.  Having a fully packed itinerary leaves no room to just enjoy being with each other.  Be in the moment, because before you know it-it’s time to go home and plan your next trip!

I Won’t Be The Thinnest Girl At Our Wedding

I believe every day life holds a magical beauty all of it's own if we only have the patience to look for it... Follow along as I navigate newlywed life, go on exciting new adventures (and a few misadventures), and learn more about myself and the world than I ever thought there was to know.